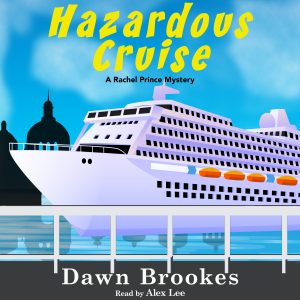 A saboteur. A dead body. Rachel Prince risks all to track down a determined killer.

Cruise ship sleuth, Rachel Prince just wants to spend New Year’s Eve with her husband and the in-laws. But when she gets a call from the Coral Queen’s chief of security, Jack Waverley, she drops everything and flies to Italy. There, she parts from her husband and joins her favourite ship for a winter Mediterranean and Adriatic voyage.

Rachel discovers a crew under pressure. With Waverley threatening to lose control and a health and safety chief on the warpath, it’s hard to know what’s coming next. Not only is Waverley worried about what the saboteur will do next, he’s received a spate of personal threats.

When Rachel’s new boss is found dead it appears the saboteur has upped the ante. Buried beneath lies, suspects and conflicting evidence, Rachel struggles to unravel a complex web of deceit. As she works undercover, Rachel finds herself isolated and under attack.

Can the clever sleuth find out who is behind these unusual incidents before she too becomes a target?

Another compelling story featuring Rachel Prince. The setting of the cruise ships make it interesting with the descriptions of places anyone has cruised knows about, but with the added ingredient of some of the places only staff are allowed. The characters have all developed as the series continues, and make reading about them all the more fun. The pace of the stories makes it a pleasure except that you seem to finish them very quickly, already looking forward to reading the next book. Highly recommend all books by Dawn.